The Classics as Seinfeld Episodes 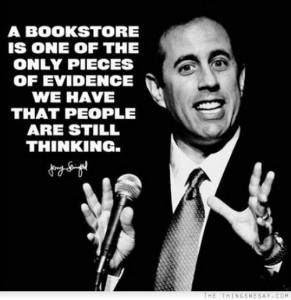 Admit it- back in the ’90s, you had the urge to send Larry David and Jerry ideas for Seinfeld episodes. Somehow, though, you lost your nerve, or lost the napkin upon which you scribbled your idea, or had it shot down by a cruel “friend.”

Well, this year marks the 25th year since the show debuted, and there’s a reason why it’s still in reruns: it was GENIUS.

So in honor of this milestone, we at the Riot wondered what Seinfeld episodes would have looked like if they’d been based on the classics (after all, it was literary at times, as Greg’s post shows).

Enjoy these Seinfeld-classics mashups and include your own in the comments!

-------------------------------------
Episode inspired by Conrad’s Heart of Darkness:  George asks Jerry to pick up something he left at his parents’ house after storming out following a heated argument. Jerry goes and never returns to his apartment, doesn’t call, basically disappears for a few days. George enlists Kramer and Elaine to help him retrieve Jerry from his parents, who have brainwashed him with food and photos of George as a baby. Jerry refuses to leave, and then keels over from too much paella.

Episode inspired by Melville’s Moby-Dick: Kramer gets knocked down by a Cadillac while crossing the street, but before he can get the full license plate number, the car speeds off. His injuries include a broken leg and scratches. Obsessed with thoughts of vengeance, he enlists Newman’s help in hunting down every car with a license plate that begins with “LM” and slashing their tires. They attack ten cars, and in their zeal go after an occupied police car- where their spree ends. Jerry has to bail them out of jail.

Episode inspired by Hardy’s Tess of the d’Urbervilles: Elaine travels to Boston to see a long-lost cousin who wants to meet her about an aunt’s will. He tries to put the moves on her, but she kicks his ass so hard, he files assault charges against her. Jerry bails her out of jail.


Episode inspired by Dostoyevsky’s Crime and Punishment: Kramer is hard up for cash, and when Jerry complains that his Uncle Leo is unloading a bunch of family heirloom junk on him, Kramer snatches a ring and takes it to a pawnshop. When Kramer and the pawnbroker get into a fight over how much the ring is worth, Kramer wallops him on the side of the head with a bag of pennies. He only feels sorry that he lost the pennies.

Episode inspired by Joyce’s Ulysses: George wakes up in his girlfriend’s apartment, shares breakfast with her demanding cat, crashes the funeral of a friend whose family despises him, sits in the coffee shop with Jerry for five hours discussing said funeral, worries that his girlfriend is cheating on him (she is), goes back to her apartment anyway, meets dude girlfriend is cheating on him with, they all play Scrabble.