Review: One of Us is Sleeping by Josefine Klougart, translated by Martin Aitken

One of Us is Sleeping by Josefine Klougart, translated by Martin Aitken (Open Letter, 260 pages, July 12)


The second novel in Open Letter's Danish Women Writers Series (the first is Naja Marie Aidt's Rock, Paper, Scissors), One of Us is Sleeping is not so much a book as a doorway into one woman's brain.

The narrator's two main preoccupations- the disintegration of an intense romantic relationship and her mother's cancer diagnosis- are woven together in a tight coil of regret, doubt, and nearly-crippling anxiety. Just as many of us cannot help but rethink and rehash certain details of our lives, questioning our actions and others' motives until we nearly drive ourselves crazy, so the narrator jumps around in her memory to try to figure out where her relationship went wrong. Old conversations, silences, separations- all swirl around in her mind, often marked by brief but intense reflections on the nature of time, colors, home, love, and more.

Klougart deftly transports us into another person's mind while simultaneously showing us our own.  One of Us is Sleeping is a novel about missed connections, lost opportunities, and the trap of standing still instead of moving forward. It's haunting, but the only ghosts are in the narrator's own memory.
Posted by Rachel S. Cordasco No comments: 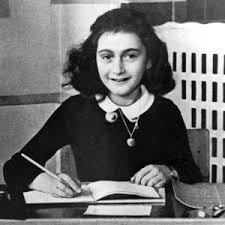 According to The Guardian, a virtual reality film is in the works that will bring viewers “into” the Amsterdam annex where Anne Frank hid with her family from the Nazis from 1942-1944.

I think I speak for many people when I say to Jonathan Hirsch (the producer): just….just don’t.
Anne Frank’s story is undoubtedly one of the most compelling to come out of the brutality and carnage of World War II. I read her diary many years ago, and was moved by its honesty and optimism, even as Anne was forced to live in hiding for years.

But the ways in which people have pounced on this tragic story over the years is shameful, in my opinion. Aren’t there enough freakin’ plays and films about the Frank family’s experiences? Do we really need another one, and one that is so voyeuristic? Thankfully (and hopefully), we will never know what it’s like to have to live cramped and silent for years, terrified at the slightest noise because it might mean that we’ve been discovered and will be dragged out to be sent to a camp or shot. So let’s not pretend that we can understand.

In Translation: May Fiction and Poetry

I say this every month, but I’m really excited about these new translations, you guys. We have some Tamil poetry co-translated by Ravi Shankar (RAVI SHANKAR!), a work of fiction-not-fiction from Spain, a novel by a Romanian Nobel laureate, and the story of a troubled childhood in Morocco. Dig in!

The Autobiography of a Goddess by Andal, translated by Priya Sarukkai Chabria and Ravi Shankar (Zubaan Books, 176 pages, May 15)

In Translation: April Fiction and Poetry

Yes, April is the cruelest month because I have a list of new translations here for you, which means that your TBR pile/shelf/bookcase is going to get larger and more unwieldy. You’re going to have to live until you’re 800 or so just to read all the books you already have (don’t worry, I feel your pain). And so, without further ado, I bring you fiction from Japan, Portugal, and Cameroon, and poetry from Austria.

Acclaimed Portuguese writer and diplomat Eça de Queirós (1845-1900) wrote twenty books in his lifetime, among them The Yellow Sofa, a story about marriage and forgiveness in the face of betrayal. His work has been compared to that of Dickens, Flaubert, and Tolstoy.

I’ve read a lot of books so far in my time here on Earth, so I can say pretty confidently that there are some novels out there that are so unbelievably wierd/nutty/cuhrazy, you have to pause every twenty pages or so just to stare at a wall and wonder “did I just read that??!”

So when were some of the most bizarre American novels written, you ask? The twentieth century? NOPE. The nineteenth, you guys (for the purposes of this post, the “long” nineteenth century, as they say in academia when things fall a little outside the date boundaries). That was one wacked-out hundred years. I mean, civil war and railroads all over the place and imperialism and financial crises every five seconds and all kinds of new-fangled inventions…people’s heads were a-spinnin’. Makes sense that they wrote the following novels:

Wieland: or, The Transformation: An American Tale (1798) by Charles Brockden Brown

I was first introduced to this interesting gentleman’s work during my first semester of grad school and DAMN but his stuff is freaky. He has one novel about a yellow fever outbreak, one about a sleepwalker, and a few others. Wieland was based on the true story of a farmer’s murder of his entire family because “voices” told him to do it. In Brockden Brown’s version, the “voices” are actually all from the same man, a ventriloquist named Carwin who’s been hanging around the Wieland estate and stirring up trouble. It’s gothic and Poe-ishly dark and this ventriloquist guy is pretty unique.

It seems that there’s nothing James Patterson won’t do to promote books. In recent years, he’s given a ton of money to libraries and independent booksellers, and now he’s trying to turn more people into readers through “BookShots“- short movie-like pieces that are faced-paced and easy to read.

Well. We here at the Riot decided to brainstorm even MORE ideas for James Patterson, in order to help him with his quest(?) to turn every person on the planet into a reader:

Patterson invents a brain implant that transmits books directly into your mind.

Patterson rides around on drones, throwing books through people’s windows.

An Absolutely Serious Analysis of TOOTLE

I’m sorry to have to tell you this, but Tootle, far from being a cute children’s book about a curious baby train, is actually virulent fascist propaganda.

Now, my 3-year-olds are a little obsessed with it, and that’s fine. It’s pretty amazing that they’ll sit through such a relatively lengthy book right before bed. The content, though? Well, it’s really problematic, but if my husband and I were to try reading a different book while surreptitiously dropping Tootle into an industrial shredder, the twins would drop us into the industrial shredder instead so…

But seriously, people. According to the story, this baby train named “Tootle” goes to train school and takes classes in stopping for red flags, staying on the rails (NO MATTER WHAT), and all kinds of other things. But Tootle, being a curious, rambunctious creature, takes off-rail romps through meadows, racing horses, making daisy-chains, and generally having a helluva time. But the citizens of the town realize that Tootle is breaking the cardinal rule (staying on the rails) and they get together to teach him his lesson: i.e. do what you’re told and stay on the straight and narrow or we’ll make you cry.

Waistcoats, Weaponry, and Writing: An Interview with Gail Carriger

Author Gail Carriger writes comedic steampunk mixed with urbane fantasy. Her Parasol Protectorate books, their manga adaptations, and the first two books in her YA Finishing School seriesabout Victorian girl spies were all New York Times bestsellers. Her newest book, Waistcoats & Weaponry, is out November 4th. She was once a professional archaeologist and is overly fond of tea.
Gail was kind enough to answer some questions about her latest novel and writing in general. So pour yourself some tea, button that waistcoat, and let’s get started!

Rachel Cordasco: Waistcoats & Weaponry is the third book in your young adult steampunk Finishing School series: can you give us an overview of this latest installment and explain how it fits into the series as a whole?

Gail Carriger: In this book Sophronia and her friends finally get to spend time away from their school, putting all their newly leaned spy skills to good use. There is a train heist, an accidental kidnapping, a renewal of old acquaintances ­(not all of them welcome) and, finally, some serious flirting. Also, I suspect someone throws food at someone else ­– in my books, they usually do.


Thanks to Restless Books and translator David Frye, we have yet another Yoss novel out of Cuba to brighten our year. Remember my review last year of A Planet for Rent? Well, Super Extra Grande brings all of the sardonic humor, unconventional characters, and fast-paced plot we’ve come to expect. As one of Cuba’s best-known and beloved writers of speculative fiction, Yoss continually inspires us with his visions of alternative realities.

In Super Extra Grande, he introduces us to Dr. Jan Amos Sangan Dongo, “Veterinarian to the Giants”- that is, the guy who treats the galaxy’s largest organisms: eighteen-hundred-meter-long tsunamis, titanic amoebae of the planet Brobdingnag…you get the idea. Luckily, the good doctor himself is pretty large, for a human, so he can tackle cases other vets wouldn’t approach with a ten-foot pole.

Review: The Best of Spanish Steampunk, edited and translated by James and Marian Womack