Mashing Up a Month of Reading 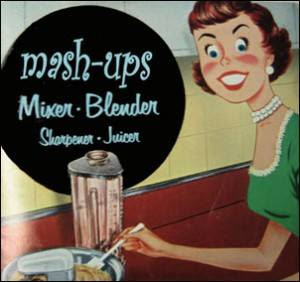 My bookish resolution for 2014 was to kick my reading up into high gear. To that end, I’ve been dragging my sorry behind out of bed around 5:30am every morning (ok, ok, most mornings) just to make sure that I get a good chunk of reading done each and every day. Surprisingly, I’ve actually managed to keep to this schedule, with the help of my two good friends coffee and chocolate croissant, which keep me and my book company.

I’ve really been able to plow through a bunch of great books with this schedule, and it occurred to me that it would be ONE BIZARRE BOOK if I were to smash them together into a single big honking volume. Why would I ever do that? Well, let’s just call it a fun thought-experiment!

What follows is a brief mash-up of the books I read in January, and here’s the extra-fun part: YOU have to guess which books were mashed!!! (The answers will be at the bottom of the page). Enjoy!


Roaming Through Time and Space: A Terribly Irreverent Mashup

So this Kid falls in with a bunch of violent dudes who like roaming around and causing mayhem wherever they go, but then the Kid meets up with this English guy named Archie and they hit it off. Archie gives him a tour of London and introduces him to his wife and friends, but the Kid decides he’d rather hang out in America, so off he goes. He somehow finds himself listening to a writer telling him about his friend the ex-professor ex-dean who lost his job because of a misunderstanding, and the Kid’s like, yeah, life throws you some truly unexpected curve balls sometimes. Apparently, this ex-professor dude, being all bummed that he got booted, hops a plane to some Eastern European city and roams around with a fellow veteran looking for an apartment where they can split the rent and brood together over their past lives. The ex-professor’s new veteran friend decides to go on a jaunt to France, but stumbles into a time machine when he reaches Paris, and finds himself in the world of jazz and flappers and Chanel N.5. One of the Chanel models catches him winking at her and pushes him out a window, where he falls back into the time machine and lands in a fish tank in a labor settlement in a dystopian version of Baltimore. He meets a girl who’s on her way outta town to find her boyfriend, and he accompanies her on the journey, where they find a guy sitting on a pile of manuscripts, trying to sort them out. This Reader feels like he’s met the veteran and the girl before in like six previous lives, and tell them they can stay with him. Suddenly, all kinds of strange things start happening to the trio: skeleton-stealers harass them, jars filled with who-knows-what appear on tables, ghost-crowds appear out of nowhere. Deciding that they need a break from the weirdness, the trio hops a plane to India, where they hire a tour-guide and listen to his stories of arranged marriages and the Indian-American immigrant experience. The End.